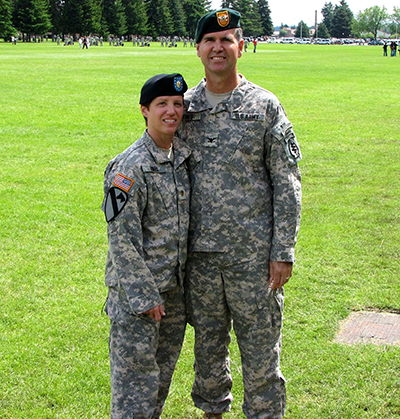 After 21 years of service, Natalie Vines was medically discharged from the military due to severe vision problems caused by two traumatic brain injuries. Thanks to UAB Eye Care treatment, Vines has seen his vision improve.

Vines and her husband, Brian. Natalie Vines joined the military in 1991. Over the years she has had multiple combat deployments all over the world. After postings in Texas, Washington and Haiti, she was deployed to Iraq in 2005 and 2009.

During her first tour in Baghdad, Iraq, Vines was injured by enemy mortar fire, causing traumatic brain injury. In 2009, while deployed to Mosul, Iraq, she suffered a second TBI, which resulted in a seizure disorder, severe migraines and vision problems. Most of his vision problems stemmed from the vestibular system, which includes parts of the inner ear and brain that process sensory information involved in controlling balance and eye movement. Because Vines’ balance was affected, his physical activity was limited.

After 21 years of service and many years of treatment for those injuries, Vines ended her military career when she medically retired from the military in 2013.

In 2019, Vines and her husband moved to Alabama, where her care was transferred to Birmingham Veterans Administration Medical Center. Due to her long-standing vision issues, she was referred to the University of Alabama at Birmingham Eye Care’s mTBEye clinic.

The mTBEye Clinic is a collaboration between Children’s of Alabama, UAB Medicine, and VA area hospitals that focuses on the consequences to the visual system following impact exposure.

“At UAB Eye Care, I received exceptional care,” Vines said. “They developed a team treatment approach to help my eyes recover from my battle injuries.”

According to Vines, UAB Eye Care directly and indirectly changed her life in positive ways. 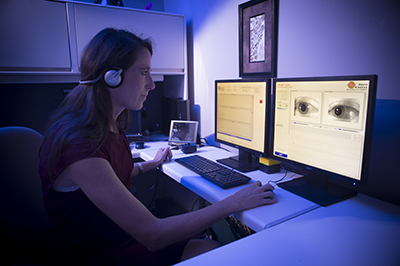 The VOR clinic allowed Vines’ care team to assess the effectiveness of his vestibular system with his vision after impact exposure. Vines’ eyes had to be retrained to work together and focus as a single unit. The clinic taught him exercises to do at home to stabilize his eye movements and prescribed him the right glasses to improve his balance.

“Throughout my care, my team provided me with tools to improve my balance and eye movements which ultimately allowed me to return to the physical activities I love, especially outdoor activities,” said said Vines. “The ophthalmologists and staff at UAB are the best I have ever worked with. They welcomed my medical assistance dog and me with open arms, and I feel appreciated, respected, and listened to.