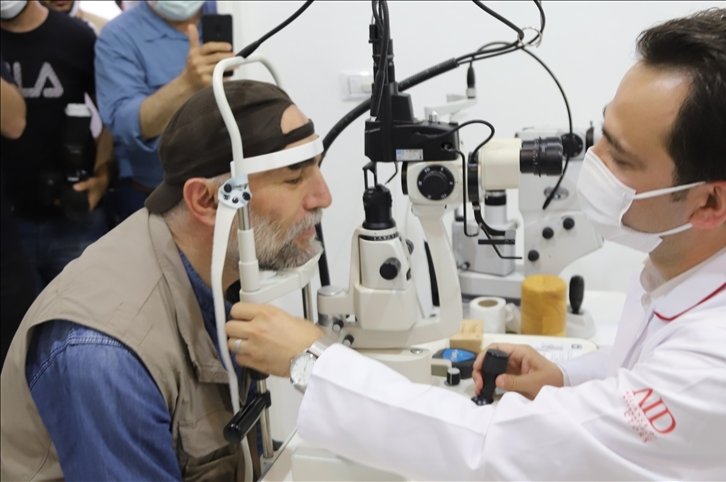 In a country ravaged by an ongoing war for more than a decade, with health facilities bombarded by regime forces, displaced Syrians have limited access to eye care. A Turkish non-governmental organization (NGO) is trying to solve this problem.

It provides free eye care to thousands of people in northern Syria displaced by years of conflict. In less than a year, the Alliance of International Doctors (AID) eye center in Idlib has performed hundreds of cataract operations and examined 7,000 people with eye diseases.

Due to mass migration linked to the civil war and terrorism in Syria, more than 4 million people live in Idlib, an area near the Turkish border outside the control of Bashar Assad’s regime, many of them in tents.

Samer Alkhalil, an ophthalmologist at the centre, said the facility sees all kinds of patients with vision problems, retinal diseases, cataracts and corneal problems. “We prescribe the necessary medications or surgery, if necessary,” he said. “If the surgery is related to cataracts or similar cases of intraocular lens implantation or anterior vitreous cutting, we schedule an appointment with the patient and perform the operation within weeks of the examination.”

The center performs about 100 operations and 900 examinations every month, he said, with refractions and poor vision making up most of the cases. Alkhalil said there is a significant number of cataract patients in Idlib. “The reason for the high number of cases here, more than in other places in the world, is the gap or lack of (health care) services in recent years,” he said. He added that the center is currently working on a large number of cataract operations, in addition to eye exams and the distribution of medicines and glasses.

The center is also actively training new doctors, he said. “We train new doctors who work within the specialty – we call them residents or assistant doctors,” Alkhalil said. “We provide them with educational services, whether in the clinic or in operations, so that later on there is not a vacuum in the community caused by a lack of doctors.” He said the center supports other institutions by providing free eye care services. “We try to support them with supplies, sometimes scientific support, medical support in all respects.”

The group, with contributions from partner institutions, has also been active in various parts of Idlib and other locations, such as neighboring Turkey and Africa, providing prosthetics, cataract surgeries and educational surgeries. .

Keep up to date with what is happening in Turkey, in its region and in the world.