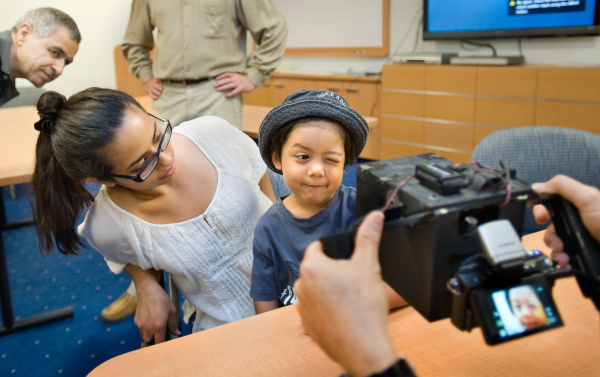 ANAHEIM — Rayden Feghali, 3, held his Disney light-up sword tightly. He wasn’t sure what the camera in front of him was doing. Then he caught a glimpse of her face on her preview screen – her eyes were lit up bright orange.

He smiled, as did his mother, Marcella Feghali. For her, it was a sigh of relief.

“I was crossing my fingers hoping they were normal,” Feghali, 27, said of her son’s eyes.

The Irvine resident and her son took a free eye screening test Saturday for infants and preschoolers. Tom Cataldo, founder of the nonprofit Better Vision for Children, hosted the all-day screening at Caliber Motors Mercedes-Benz of Anaheim. He said it was crucial to screen the eyes of children under 5 for physical problems, and the earlier it was done, the better.

He had seen about four children in the first two hours.

Cataldo, who is legally blind, invented a camera 27 years ago used to screen for photorefractive vision. His camera shines his flash into his subject’s eyes, capturing a photograph to detect how the eyes are focusing and a number of other issues, common problems such as nearsightedness or farsightedness and astigmatism , or more serious, even fatal problems, such as lazy eye, cataracts and tumors.

He started his showings in Baja California, then spent decades in San Diego before moving his organization to Anaheim Hills two years ago. Cataldo said Orange County is in dire need of a broader vision care accessibility and awareness network.

“People tend not to stray too far from home when they want to do something like this,” he said. “I’m not impressed with the availability of doctors – pediatric ophthalmologists – for these issues.”

Kelly Pijl, director of external affairs for the Orange County Children and Families Commission, said she has earmarked $1.5 million from Proposition 10 for pediatric funding and is collaborating on a new program to pediatric vision for the county with Children’s Hospital of Orange County, UC Irvine, UCLA, UC San Diego and UC San Francisco.

The commission, which focuses on the health and school readiness of children up to age 5, received an official report on children’s vision care in the county on Wednesday. He will meet with his partners in November to review the recommendations of the new vision program focused only on children under 6 years old.

“The program is in its early stages,” Pijl said. “The recommendations are to be put into use within the next two months, which would help decide on formal action.”

Natalie Gerdes, a registered nurse with the Newport Mesa Unified School District, also felt the need to pay more attention to pediatric vision health this year. She understands how important it is for children to be screened young and is counting on a new county program to improve the use of screening technology in Newport Mesa preschools.

“It can make a huge difference in a child’s life, in everyday learning experiences in general, and academically,” Gerdes said. “They may have trouble concentrating in school, and the problems go on too long until we can’t do anything about it. We need to identify these symptoms early for intervention.

She said part of the problem has to do with access to technology. Although there are new technologies on the market, the elements used by schools may not be as up to date.

Another part of the problem was giving parents a clear route for where to go after their child had a vision screening.

“Having access to testing and a system in place to refer them to care would make a huge difference. It’s a huge leap forward,” said Gerdes. “Children with special needs in particular struggle to access care.”

According to the 2010 U.S. Census, 231,218 children in Orange County are under the age of 6. Gerdes estimates that 20 to 30 percent of preschoolers in the county have vision problems.

Dr. Robert Lingua, a pediatric ophthalmologist and clinical professor of health sciences at UC Irvine, presented the pediatric vision care report to the commission. Free screenings would be more accessible to preschoolers at some preschools or health clinics, he said. However, the quality of eye care in clinics can falter as screenings are usually labor intensive and time consuming for staff.

He also said educating families about their child’s vision can also be challenging. Often, he says, parents expect their child to be verbal or cooperative, but when a child under 5 has vision problems, they are unwilling or unable to say what is bothering them.

“We know that of all three to five year olds who get screened, 20% are going to fail,” Lingua said. “Six to eight percent are in desperate eye correction, while two to three percent have medical or surgical issues that require a referral.”

Cataldo targets its screening to low-income families. He does not treat children for their symptoms. Instead, he fills out a form that directs families to eye doctors who partner with the organization to cut costs. He said he refers about a third of the children he screens for treatment.

When she was in line, Feghali hadn’t thought to take Rayden for an eye exam until that morning. She said her father told her about the event because he was having his car serviced at the dealership.

Before Rayden’s exam, Feghali said she would monitor her vision at home or maybe take her for an eye exam at Costco. After it was over, she considered taking him for an eye exam every one or two years.

“It was easier than I thought,” Feghali said. “I thought they would use more instruments.”