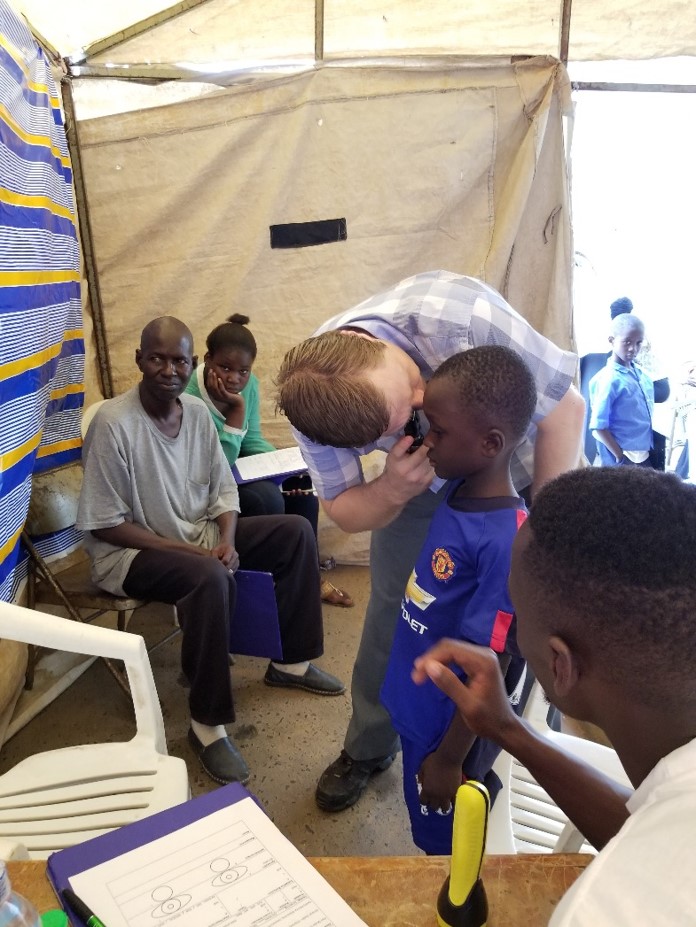 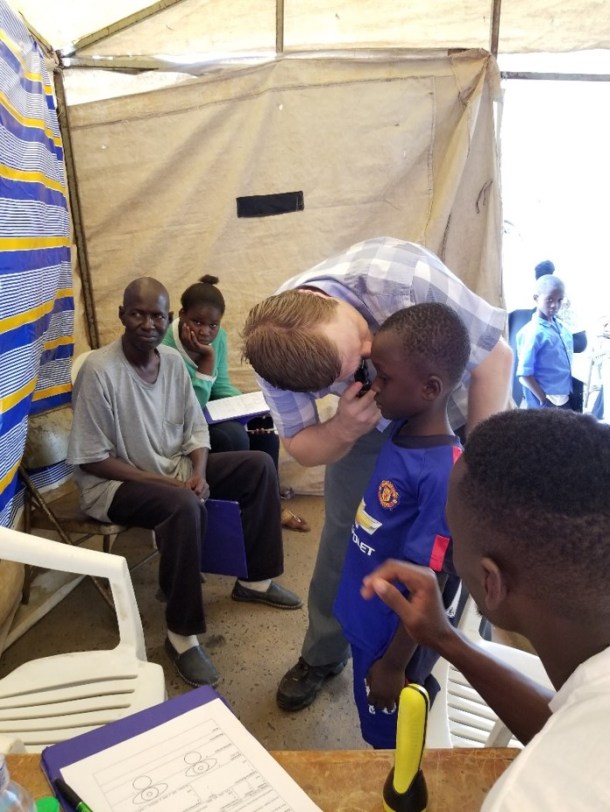 In the fall of 2018, three ophthalmology specialists from the University of Vermont Medical Center traveled to the town of Basse Santu Su in The Gambia to visit a new vision center in this small West African country.

There they saw many children with the use of only one eye. These young patients had suffered from a variety of highly treatable eye conditions, but had not received timely care to correct the vision loss. Some had keratoconus, a progressive eye disease that thins and swells the cone-shaped cornea. In other cases, an infection of the lacrimal sac, dacryocystitis, has not been treated. A child could not see due to a dislocated lens.

This is not unusual for The Gambia, says Sheila Chamberlin, an orthoptist at UVM Medical Center Ophthalmology who led the team on the recent medical mission. Unlike in the United States, where children undergo comprehensive eye exams and vision screenings before entering primary school, pediatric eye care in The Gambia is largely ignored and traditionally viewed as unnecessary, Chamberlin says. 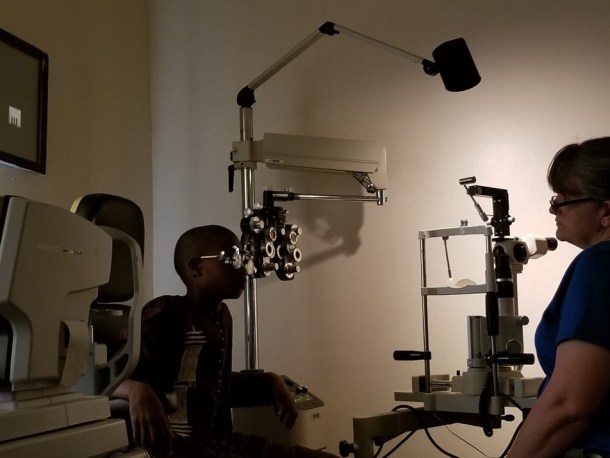 “Culturally, it’s just not something they do,” Chamberlin says. “They just think kids can see. They don’t need to have their eyes checked.

Chamberlin traveled with Sujata Singh, a pediatric ophthalmologist based in Burlington, and Jeffrey Young, a comprehensive ophthalmologist who works in Berlin. Their two-week trip included visits to some of the seven vision centers Chamberlin helped establish on previous assignments in The Gambia, which occupies a sliver of land tugging at central Senegal. Since 2013, Chamberlin has traveled the country to establish sustainable eye care for the adult population.

Gap in eye care for children

Despite extreme poverty, The Gambia has a stable government and a well-established healthcare system, Chamberlin says. Even with a shortage of doctors, Gambian nurses and other clinicians have been trained to identify and treat cataracts, even to perform surgery and to check for other eye diseases.

Gambian adults are regularly screened for vision and treated for cataracts and other common eye problems, but children there only go to eye doctors when they have an obvious injury or problem, Chamberlin says.

“There is this gap, and I think we can fill it,” Chamberlin says. “And they’re going to have this amazing eye coverage.”

If the focus is not on eye care and safety, children who suffer from trauma or infection can end up with blindness or partial vision loss in that eye. They become monocular, with the use of a good eye. During clinic visits, the team at UVM Medical Center saw half a dozen patients each day with monocularity and strabismus, a misalignment that makes someone squint.

Chamberlin would like to set up a training program for pediatric eye problems. She wants to see The Gambia establish a school-based eye care protocol similar to that of the United States. The Gambian population is 90% Muslim and children generally start school at the age of 3 by studying the Koran.

“In the first three to five years, you can do a lot with kids (to improve their vision),” Chamberlin said, “so we really focus on that age group.”

Open your eyes through education

Chamberlin is Vermont’s only orthoptist. She specializes in pediatrics and neuro-ophthalmology, with expertise in the development of vision and the ability to use both eyes together (binocular vision), particularly those that affect vision in children. There are fewer than 400 orthoptists nationwide, according to the professional organization for the profession.

Chamberlin worked in a private pediatric ophthalmology practice until the summer of 2017, when she joined UVM Medical Center Ophthalmology to expand her pediatric care. Since 1998, she has carried out medical missions. She made her first trips to The Gambia in partnership with OneSight, an organization sponsored by eyewear company Luxottica that brings quality eye care and eyewear to underserved countries.

On the recent trip, the main goal of the team was to educate and communicate to members of the medical community the importance of pediatric eye care. “It was to assess what they have, what they’re doing, what the need is,” Chamberlin says.

The goal of UVM Medical Center’s partnership with The Gambia is to close the eye care gap for children, but they also raise awareness of the issue, she says.

The team lectured to students and current providers at the Sheikh Zayed Regional Eye Care Center in Banjul, the capital of The Gambia. Sheikh Zayed is the top center in the country, seeing the toughest cases that need specialists.

Today, every Sheikh Zayed student undergoes training that includes minimal exposure to pediatric eye care. The students come from all over Africa, so they will take this education home, says Chamberlin. Hopefully they will also help to communicate with parents and influence them to recognize the need for this care.

Chamberlin, Singh and Young visited The Gambia Organization for the Visually Impaired, a school for the blind which greatly impressed the team with its focus on life skills. The UVM Medical Center team performed vision screenings at an orphanage.

Singh says she found the Gambian people remarkable. “Really, their intentions are pure,” she says. “They are such smart people. There are many things they can teach us, and they are very humble about it.

She was struck by how equipped and motivated they are to tackle this health issue and how open they are to suggestions. “If you go to a country to help and you just think, ‘I’m going to save it’, you’re missing a big part of the opportunity,” Singh says.

The team did not intend to treat many patients, although they did.

At the Sheikh Zayed Center, a shy boy had vision of minus 16 in both eyes – severe myopia – and had never had glasses. This is called bilateral amblyopia or the development of poor vision.

If the child had had his vision corrected with glasses at an early age, he would not have developed such severely impaired eyesight, Singh said. Without correction, the eyes cannot communicate with the brain to see anything other than blurry.

Chamberlin put the boy’s prescription in a trial frame, and he broke into a smile. “He didn’t want to take them off,” she recalls.

“There’s nothing like putting a pair of glasses on someone. It certainly resets you realizing what is important and what we should value. And when you have a skill that can help people, you really should use it.