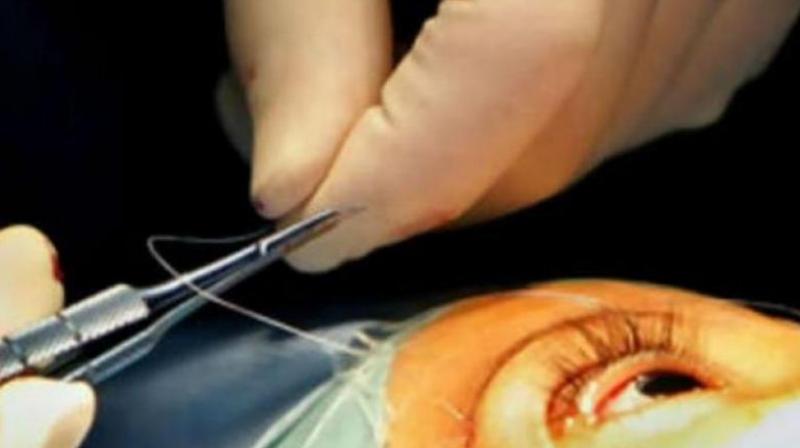 VIJAYAWADA: Ophthalmologists working in government teaching hospitals have questioned the warnings issued to them at the request of major health authorities regarding the conduct of cataract surgeries under the YSR Kanti Velugu programme.

According to sources, based on direction from senior health officials, the Director of Medical Education issued a notice to Heads of Departments (HoDs) of Ophthalmology at all public teaching hospitals. Department heads had been instructed to warn ophthalmologists, who had performed poorly in cataract surgeries under the YSR Kanti Velugu program in AP. The director further wanted department heads to take action if ophthalmologists did not improve their performance. The notice emphasized that it is the fundamental duty of an ophthalmologist to perform cataract surgery.

Opposing this, several ophthalmologists in public hospitals wondered how to ask them for explanations when the medical authorities themselves had not set any monthly or annual targets for cataract operations on “Avva and Tata” under Kanti Velugu .

It is learned that health authorities have collected data on cataract surgeries performed under YSR Kanti Velugu from all government teaching hospitals and other institutions from November 2020 to date. Subsequently, notices of improper or non-performance were served on nearly 75% of physicians on the grounds that they had performed less than 25 surgeries.

Many practicing ophthalmologists, including professors, have criticized top health mandarins for judging their professional performance by the number of cataract surgeries, even though they are responsible for several other duties. These include teaching medical students at PG, UG and paramedic levels, patient care, emergency and medico-legal case management, conducting examinations, court duties and a host of other tasks. other responsibilities.

An ophthalmologist from a government hospital in Visakhapatnam said, “If our performance is assessed on the basis of a number of cataract surgeries, we will only accept surgeries. Next, who will teach students, conduct practical exams, and deal with patients and emergencies. It is unfair to look for such an explanation as if we are not working at all.

Additionally, ophthalmologists pointed out that during the first and second waves of coronavirus, the majority of government health facilities were converted into Covid care centers and operating rooms closed.

“That’s why a senior health professional should lead the health department. In fact, GO 64 must be rescinded because it gives enormous powers even to junior IAS officers to suspend certain categories of doctors by targeting them under one pretext or another without any rationality,” said one. senior ophthalmologists.

Repeated attempts to contact the Director of Medical Education, Dr. M. Raghavendra Rao, to get his side of the matter proved futile.

The Best Products for Treating Dry Eyes, According to Ophthalmologists