Disrupting progress in eye care during Covid? The Indian government “forced to review” its objectives 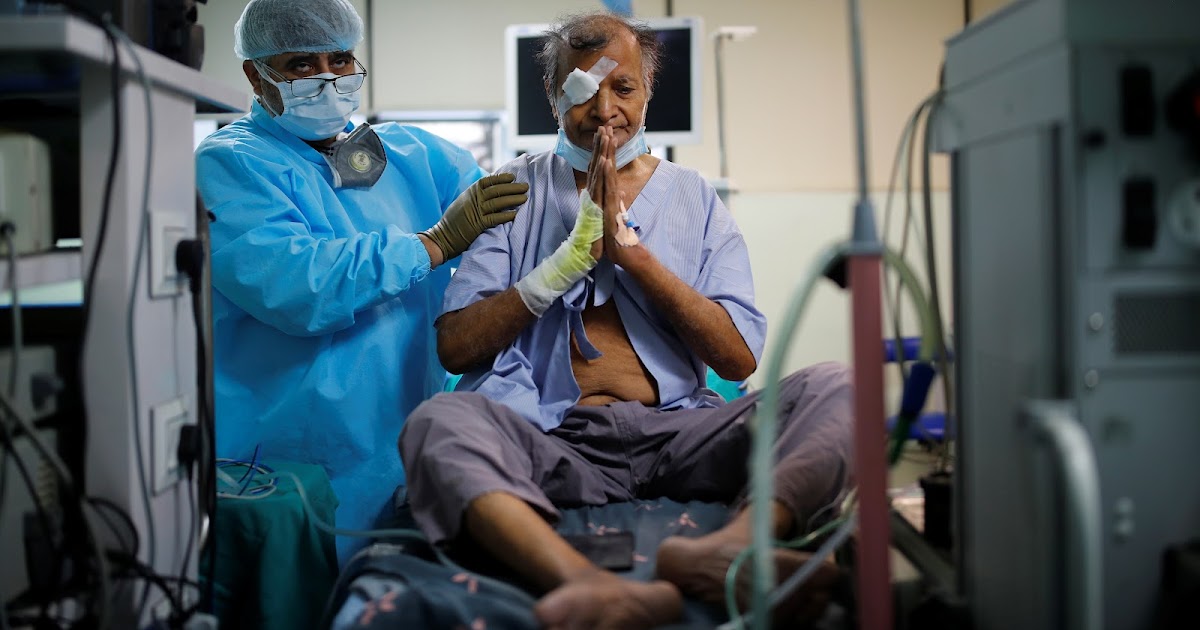 By Arjun Kumar, Anshula Mehta, Simi Mehta, Kuldeep Singh*
Visual loss and impairment affect more than how people see; it has implications for inequalities in employment, access to health care and income. According to the World Health Organization (WHO), it is estimated that 80% of vision loss is preventable or treatable. Yet many populations lack access to good quality and affordable eye care.
The WHO, in its 2021 blindness and visual impairment fact sheet, suggests that approximately 2.2 billion people worldwide suffer from visual impairment or blindness. Of these, at least a billion people have visual impairment that could have been prevented or has not yet been treated. According to their estimates, 90% of vision loss is concentrated in low- and middle-income countries.
India has been a leader in eye care for its people, instituting programs such as the National Program for the Control of Blindness and Visual Impairment (NPCBVI) (1976), under the Directorate General of of Health (DGHS), the Ministry of Health and the Family. Welfare (MoHFW), and subsequently made remarkable progress. However, due to the difficulties in meeting the needs of a large population and the obvious gaps, a new push towards comprehensive and universal eye care is needed.

According to the 2011 population census, 2.2% of the population was disabled and the percentage of sighted disabled people (excluding people with multiple disabilities) was 0.4%.
The India Disability Survey conducted under the 76th round (July-September 2018) of the National Sample Survey also reported a prevalence of 2.2% disability in the population, similar to the 2011 census. The percentage of people with a visual impairment (with or without other disabilities) was 0.2% according to this survey.
The Rapid Avoidable Blindness Survey and the National Blindness and Visual Impairment Survey, conducted under the NPCBVI, report the prevalence of blindness over several years.
It is important to note that over time there has been an improvement. The India National Blindness and Visual Impairment Survey 2015-19 indicates a prevalence of 0.36% blindness and 2.55% prevalence of visual impairment in the country. This survey uses better techniques and indicators at the same level as global standards, incorporating more inclusion criteria.
The main findings of the survey suggest that cataracts are the leading cause of blindness and visual impairment among the population aged 50 or over, accounting for blindness in 2 out of 3 people and visual impairment in 7 out of 10 people in this segment.
The survey also shows that
“The WHO Global Action Plan for Universal Eye Health 2014-2019 aims to reduce the prevalence of visual impairment by 25% by 2019 compared to the 2010 baseline. WHO has estimated prevalence of blindness, MSVI and VI at 0.68%, 4.62% and 5.30% respectively in India for the year 2010. Current survey shows 47.1% reduction in blindness , 52.6% of MSVI and 51.9% of VI from baseline. This shows that the target of 25% reduction in visual impairment has been successfully achieved by India.”
However, it is important to note that the International Agency for the Prevention of Blindness (IAPB), based on the 2020 VLEG/GBD (Vision Loss Expert Group/Global Burden of Disease) model, reports that in 2020 in India, there were about 270 million people with vision loss, including 9.2 million blind people. Recent national figures notwithstanding, these IAPB estimates are multiple, raising questions and requiring further investigation.

The National Program for Blindness Control (NPCB) was launched in 1976 as a 100% centrally funded program with the aim of reducing the prevalence of blindness from 1.4% to 0.3% (d by 2020). It was later renamed National Program for Blindness and Visual Impairment (NPCBVI) in 2017.
According to the MoHFW Annual Report 2021-22, the program currently provides primary and secondary eye care services under the National Health Mission (NHM) with cost sharing between the Center and the States. As part of the National Health Policy (PNS), the objective is to reduce the prevalence of blindness to 0.25% by 2025 . The MoHFW has set a target of 330 lakh cataract surgeries with an annual target of 66 lakh cataract surgeries under the NPCB during the 12th Five Year Plan (2012-2017).
The quarterly program review (September 2019) highlights major issues such as the low utilization of funds allocated by most States, the poor physical performance of many States and the delays in payments to NGOs (for the realization of cataract and treatment of other eye diseases) by the district programme. Officers. 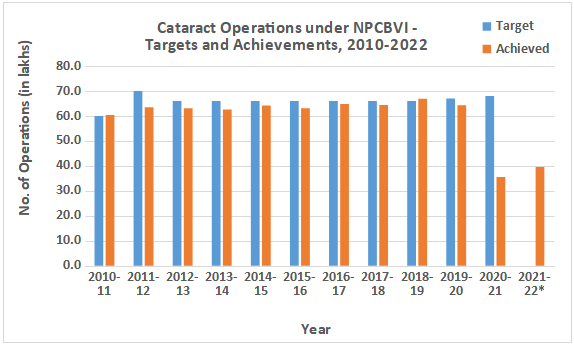 Over time, the program has maintained a phenomenal pace in achieving its cataract surgery goals. However, with the onset of the COVID-19 pandemic in 2020, program performance experienced a decline. Several media reports shed light on the backlog of cataract surgeries and the government’s efforts to clear it, with a proposed total of 270 lakh surgeries to be performed over the next three fiscal years (2022-23 to 2024-25).
Similarly, other program activities – providing free glasses to school children with refractive errors, treating and caring for other eye diseases, collecting donated eyes and training eye surgeons – were carried out at a rapid pace over the years, but have seen a decline amid the pandemic.
In addition, a Parliamentary Standing Committee on Health and Family Welfare noted in March 2021 that there had been an underspending of funds for staff capacity building, which requires special attention. (See: 126th Report on Grant Applications 2021-22 [Demand No 44] from the Ministry of Health and Family Welfare – March 2021.)
A cursory review of NPCBVI expenditures, as reported in a 2022 release from the Press Information Bureau, suggests the backlog and the impact of COVID-19 on financial aspects. The total expenditure for the fiscal years 2018-19, 2019-20 and 2020-21 were ₹396.8, 331.6 and 227.4 crore respectively. Moreover, the expenditure approval for the 2021-22 financial year has been increased to a whopping ₹724 crore.
However, due to the second and third wave of the COVID-19 pandemic in 2021-22, the utilization was only ₹140.5 crore, about one-fifth of the approved expenditure. There are also variations by state in the levels of achievement, as explained in the press release. Thus, there is an urgent need to reinvigorate the NPCBVI and the eye care sector by central and state governments, addressing unmet target demands and unspent funds.

The COVID-19 pandemic has disrupted India’s progress in providing eye care over the past two years. The government has revised the objectives of the program and has committed to eliminating the backlog of cataract surgeries with a plan for the next three years.
However, concerns about administrative and logistical issues and delays in payments to voluntary and private organizations under the NPCBVI remain an obstacle to strengthening its reach and delivery. Renewed emphasis on universal and timely eye care intervention should be seen as a priority – implementation remains the critical challenge.
Available data on vision loss and eye care are mostly program related and come from a variety of official sources. A centralized real-time data system, which takes into account eye care interventions in the private sector and NGOs, is needed to get the full picture. Going forward, initiatives such as Digital India and Ayushman Bharat Digital Mission should take the lead in integrating health and eye care records with regular, periodic, dynamic and real-time survey results to create a comprehensive statistical repository on eye care.
Government figures reflect a reduction in the prevalence of blindness and visual impairment in the country over the years, however, it is also seen that data, such as that from the VLEG/GBD 2020 model, presents the current prevalence as being several times higher than the official prevalence. The figures. This requires further evaluation.
Existing eye care programs need to be strengthened and expanded, and ophthalmic infrastructure and equipment need to be maintained and upgraded. Availability, accessibility and affordability must be central to efforts to achieve universal eye health.
As the country’s population grows and ages, the burden of visual impairment and blindness will continue to increase if rapid and effective response mechanisms are not maintained and strengthened. With India at 75 and on its way to [email protected], the importance placed on eye care and eye health will be crucial in the years to come.
Policy must move forward with a view to maintaining India’s eye care ecosystem as a strength and an asset, to shape the growth, well-being and self-reliance of the country and its aging population. in the years to come.
—
*Arjun Kumar, Anshula Mehta and Simi Mehta work for IMPRI Impact and Policy Research Institute, New Delhi, and Kuldeep Singh is Program Manager, India and Bangladesh, Seva Foundation, USA. This article is the result of a research project supported by the Seva Foundation, USA. For the full report, click here